Though I really focus on my singles game now, I played badminton doubles for years as a junior athlete.  In fact, I spent a few years playing alongside Team USA’s talented Timothy Lam.  I spent many of those years learning from coaches and fellow athletes about the distinct differences between singles play and doubles play.  I’m going to share that knowledge with you as I break down badminton doubles strategy, rules, and winning tips and tricks.

Though the sport is the same, the strategy between singles and doubles is much different.  For some athletes, transitioning between the two is difficult.  But for others, like Canada’s Jason Anthony Ho-Shue, making their mark in both singles and doubles seems effortless.  Let’s take a closer look at the categories, rules, serving, and strategy for doubles.

Badminton doubles is played with four players on the court – two shuttlers on each side of the net, working together to overtake the team on the other side of the court.  It’s one of few Olympic sports that pits men and women against each other on the same playing field.  In the competitive badminton universe, there are three doubles categories.

You may occasionally hear men’s and women’s doubles referred to as ‘level doubles’.  Regardless of what category you play in, the rules of badminton doubles are the same.  And a winning badminton doubles strategy will be the same as well.  Let’s first take a look at how the badminton court looks a bit different when you’re participating in a doubles match as opposed to a singles.

Badminton Doubles Court – How is it Different From Singles?

To an outside observer, or maybe even a badminton beginner, the number of lines on a badminton court is a bit overwhelming.  They clearly all serve a purpose or mark a boundary, but what are they all for?

Doubles and singles are played on the same court (clearly not at the same time). Having separate courts for singles and doubles would be wasteful and inefficient.   A proper badminton court will be marked up for both doubles and singles. The boundary lines used to mark a shuttle “out of play” are one of the major differences.  The boundaries for badminton doubles are wider than those for singles.  The long service line for doubles is a little closer to the net.

Another term to listen for when catching tips from fellow players or coaches is “Tram Lines”.  When someone uses the word “Tram Lines”, they’re referring to the thin strip of real estate along the sides of the badminton court.  It’s the strip of court space between the singles boundary lines and the doubles boundary lines.  It looks similar to train tracks or Tram Lines. 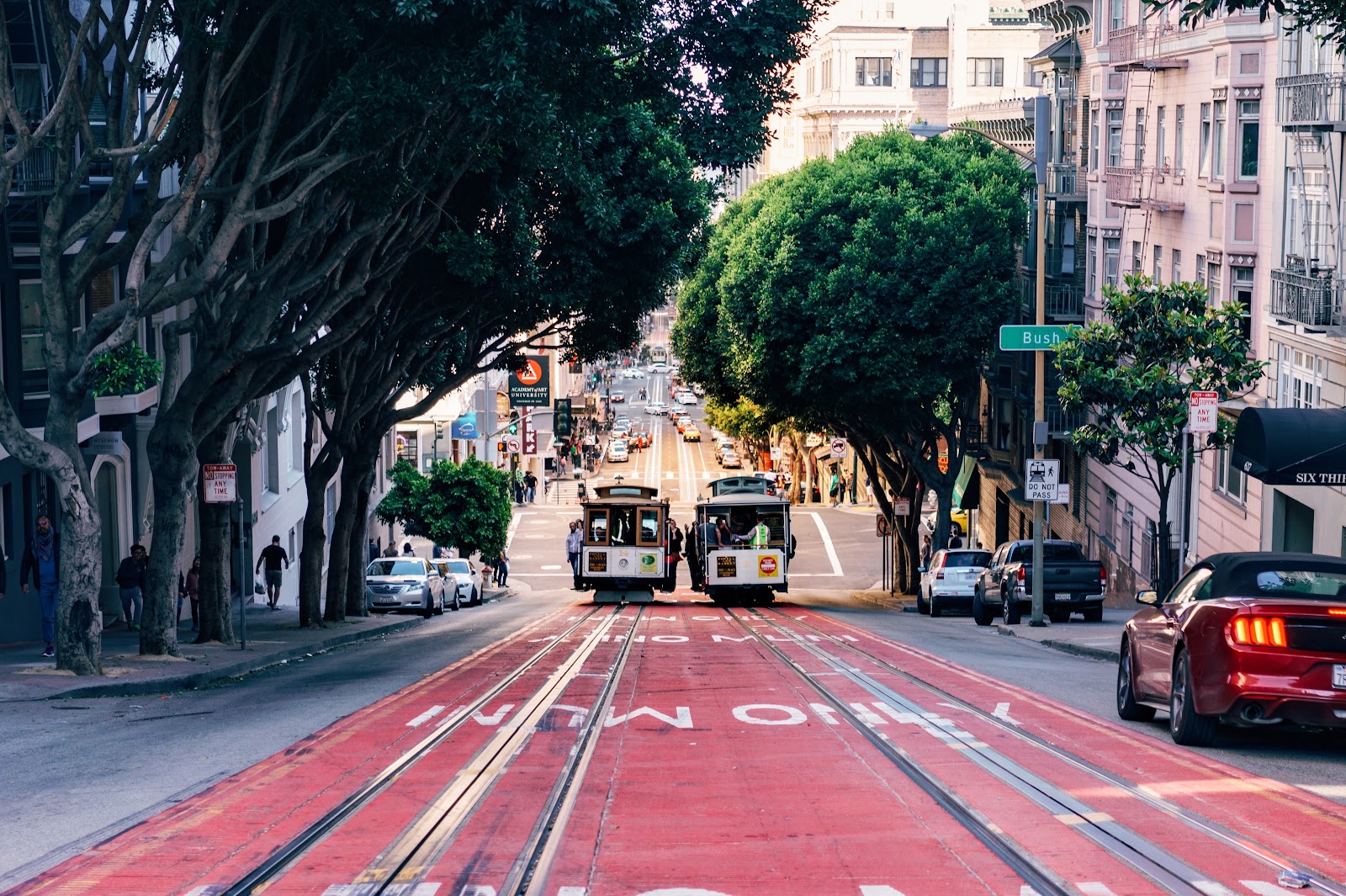 Photo by Ragnar Vorel on Unsplash

Compare these actual tram lines to the double lines created by the singles and doubles boundaries on the badminton court.  You’ll see why this area is sometimes referred to as “Tram Lines”.

Serving during a badminton doubles game is only slightly different than a singles game.  The racket must still make contact below your waist, and be traveling in an upward motion when making contact with the base of the shuttle first.  The serving player must have both feet within their respective service court.

Another difference between singles and doubles lies in the fact that you are limited as to where the shuttle is permitted to land once it crosses the net.  When serving in doubles, you must serve to the court diagonal from you every time.  For example, if you’re standing in the right service court, your serve should land in the right service court of your opponent, following a diagonal trajectory.

The very first serve is served from the right service court.  Whenever the score is even, the serve comes from the right court.  When the score is odd, the serve will come from the left court.  During a serve, the opponent in the receiving service court is the only player allowed to make contact with the shuttle.  After the shuttle has been returned, either player can make contact with it.

How should you return a serve when playing doubles in badminton?

When returning a serve in a doubles match, avoid sending the shuttle high at all costs.  The trajectory of your return should be in a straight or downward direction.  This prevents your opponent from returning the shuttle with a smash or a net kill and sets your third shot up to hopefully begin a series of attack shots that give you an advantage.

What happens when the rally ends?

There are three very common positions doubles players take up during the game, and they flow into one another as the advantage of the game changes.  At the beginning of the game, players are usually side by side to cover the court as they attempt to gain the advantage.  As one team gains an advantage, they will slowly transition to a “one player up front, one player in the rear” position.  The player in the rear sends smashed to opponents, while the player in the front executes body shots, net kills, and drops.  Defending players will usually play the rally in each of the service courts to cover as much of the court as possible.  Attacking players typically stand to the front and the rear of the court.  The player in the rear continually smashes while the player in the front executes body shots and net kills.  To illustrate these attacking and defensive positions:

Playing doubles differs greatly from singles because it is a game of constant attack.  Badminton doubles strategy has always been communicated like this:

It’s true that offensive play is key to winning in a doubles rally.  This will involve some well-aimed downward shots (think net kills and smashes).  But hand-in-hand with this theory goes the idea that one can’t ALWAYS be on the attack.  Eventually, you will find a time when you lose the initiative and be forced into a position of defense.  It’s inevitable.

Fun fact: A lift or a high clear are the two most common ways to lose the advantage.  You’re setting your opposing pair up for a series of attacks.  A high lift or clear should only be used if absolutely necessary.  Don’t be afraid to be a little bold with your shots if you can avoid a slow or high clear over the net.

But that leaves us with a burning question: What is a doubles pair to do when the tables have been turned and they find themselves suddenly scrambling to return their opponent’s shots?

Turning the advantage is another key skill for players in doubles matches.  Being able to adjust your play to reclaim the advantage and end your opponent’s attack is crucial.  Doubles pairs will need good communication, trust, and consistent practice to pull this off.

It’s important to keep a positive mindset and avoid letting your frustration level get the best of you when on defense.  It can be maddening to feel like the mouse in a game of cat and mouse when racing to reach attack after attack, but a level head is the first step in regaining the advantage.  Mistakes in badminton are born of frustration.

The next step in turning the advantage is to utilize some weakness you’ve managed to pinpoint in your opponent.  Try clearing to your opponent’s weak side and force them to use their backhand.

If you notice your opponents are carefully guarding the center of their respective court sections or favoring a particular side, attempt to direct the shuttle down the tramlines to force your opponent out of position, possibly weakening their next return.  Look for an open court space that is undefended.

5 Exercises and Drills for Doubles Players

Staying on the attack is difficult for reasons of its own.  It requires quite a bit of stamina, as well as speed and great reflexes to constantly remain on the attack for a long rally.  Gaining the initiative is a quick success, but keeping that advantage is the long haul.  Here are some drills and exercises that you and your doubles partner can use to work on your technique:

How to Improve Your Badminton Smash: 5 Pro Tips

How to Improve Your Badminton Footwork: The Complete Guide

Badminton Agility Exercises: How to Increase Your Speed on the Court