Frank Devlin is the stuff of legends on the badminton stage.  His contributions go far beyond his personal talents.  He was not only an esteemed player but also an author, a coach, and a father.

Joseph Francis ‘Frank’ Devlin was born in Dublin at the turn of the century.  In January of 1900, his parents had no idea they’d just given the world a badminton phenom.  As a youngster, he played badminton recreationally in the family garden.  He recalls playing at just three or four years old with his parents and Aunt, and eventually, a friend who lived nearby – Godron Sylvester Bradshaw Mack.  ?Curly? Mack, as he was sometimes called, played an important role in Frank’s life for years to come.

When he was young, Devlin suffered from a bone infection known as Osteomyelitis.  The end result was the loss of half of one of his heels. He was confined to his bed for quite a period, and with little entertainment, spent most of his time hitting a shuttlecock off the wall.  In time, he removed some of the feathers from the shuttlecock to make its path more unpredictable, and his activity more challenging. He refined the art of using his wrist to control the speed and direction of the shuttlecock.

As he became more mobile, he and ‘Curly’ Mack continued to practice and hone their skills.  At about 22, Frank and his childhood pal began their reign as formidable competitors in the badminton circuit – specifically the men’s doubles category.

Devlin and Mack took six titles in men’s doubles at the All England Championships.  In the ’20s and early ’30s, Devlin made it a habit of gobbling up as many titles as he could.  In his career, he swept the All England Championships seven times in men’s doubles, six times in the men’s singles category, and five times in mixed doubles with multiple partners.  A total of eighteen titles in the All England Championship is unbelievable. Two of his mixed doubles titles were won with Kitty McKane, to whom he was engaged for a short time.  During this ‘golden era’ of Devlin’s badminton career, he also took six titles at the Irish Open, and two at the Scottish Open.  He has gone down in history as one of the winningest players in badminton history – a resume that helped land him in the Badminton Hall of Fame. 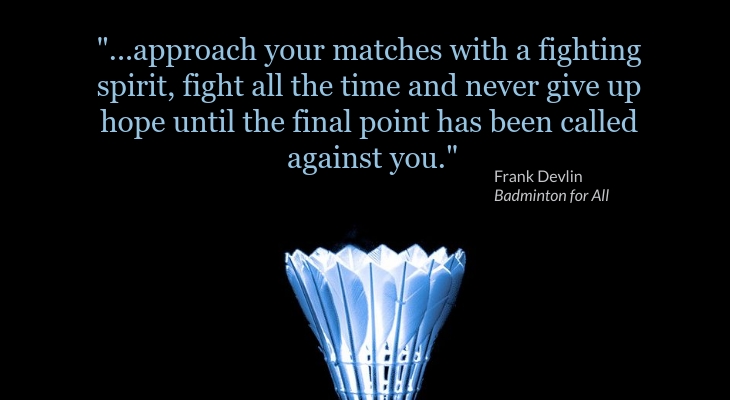 When Devlin’s career wrapped up in 1931, Frank left Dublin for Winnipeg (Canada) and became the first known person to make a living as a full-time badminton coach and trainer.? He authored several books – all centered around badminton.? With titles like ?Badminton For All?? (1937) and ?Short Cuts to Good Badminton? (1939), Devlin focused on sharing his passion and knowledge of technique and strategy with other players and coaches.??

While in Winnipeg, Frank had two daughters with talented tennis player Grace Steed.  With parents so accomplished in racket sports, it’s no surprise that Sue and her younger sister Judy became almost as decorated as their father with titles.  In his late thirties, when the girls were still younger than ten, Devlin’s family left Winnipeg for Baltimore, where he continued to coach. Devlin and his wife would remain in Baltimore for almost two decades.

Frank eventually returned to Dublin to continue passing on his knowledge and love of the game of badminton.  He coached until he was well into his eighties, and passed away in 1988.  What Frank left behind was a wealth of knowledge about technique and strategy, as well as a legacy that would rival his own with his daughter Judy and her sister Sue.

Sue Devlin was the oldest of Frank’s daughters.  Born in Winnipeg, she began playing naturally at a very young age.  Sue excelled in sports outside of badminton including lacrosse, tennis, and hockey.  Sue won the All England Championship in the women’s doubles category six times with her younger sister Judy.  She was also an astute student and got her BSc in bacteriology and physiology going on to work at Johns Hopkins University.

She was a competitor on the first two US teams that successfully took the Uber Cup.  Sue was recognized by badminton organizations as being both a successful player and a good citizen and won the Meritorious Service Award from IBF, as well as the Ken Davidson award from American Badminton Association.

Sue went on to marry Frank Peard, another international badminton star, and the pair relocated to Ireland, where Peard continued to advocate for badminton in Ireland.

Little Red Dev, a nickname Judy earned during her career, grew to be even more successful than her older sister and came very close to matching her father’s All England title number.  It’s easy to say that Judy Devlin was a Badminton superstar.  She may have the greatest career record in women’s badminton.  At the All England Championship, she won six doubles titles with her sister, the first of which she won at the young age of 18.  She was only 18 when she won her first women’s singles title as well.

In total, Judy won seventeen titles at the All England Championships, almost matching her father?s incredible record.  She won thirty-one more titles in evens at the US Open, seven gold medals at the Canadian Open, and eight gold medals at the German Open.

Along the way, Judy married fellow badminton player Dick Hashman.  In 1960, she relocated to England and became a British citizen, contributing to England’s badminton team both as a player and later, briefly, as a coach.  In 1963, Judy was inducted into the USBA?s Hall of fame.  In 1985 she was given the Distinguished Service Award, one of the highest honors from the IBF at the time.  In 1995 Judy was inducted into the International Women’s Sports Hall of Fame for her broad accomplishments as an international player.

Judy took her knowledge, work ethic, and commitment to the sport and carried on Frank Devlin’s legacy of fair play and unrivaled success.

Frank Devlin has been posthumously inducted into the IBF (now BWF) Hall of Fame in 1997, along with his youngest daughter Judy.

Do You Need Badminton Coaching? 5 Benefits Worth Knowing

The Deceptive Drop Shot All Variations Of Drops