Who is Timothy Lam?

Timothy Lam began cultivating a love for badminton at a very early age.  He began training at 6 years old.  Lam credits badminton with developing his character and shaping his way of life.  As a child, he didn’t realize what an important part of life badminton would be for him.  In an interview with founder Justin Ma, Lam reminisced about tagging along with his older brother to play badminton. Through exposure, he slowly picked up the sport.  Though he trained at many different clubs, Lam can pinpoint the season when his appreciation for the sport really blossomed.  He remarked that the development of his professional interest in badminton began when he joined Raju Rai and Bob Malaythong’s training program at CBA during his first year in the U17 age category.

Lam continued training and began ranking in junior competitions.  At best he was ranked 32nd in the world among junior competitors.  Lam played several years in the men’s doubles category with doubles partner Justin Ma and gained several national titles. He won big at the US National Junior Championship multiple times from 2007-2013.  He also is a multiple Pan America Junior Champion.

Timothy Lam is currently living in California. As a member of the US National Team, he is chasing his dreams of competing at an Olympic level, shooting for the 2021 Tokyo Games.  He is self-funding his way to international tournaments in order to earn ranking points to qualify for Tokyo.  He’s raised almost $5,000 crowd-funding with supporters to cover travel and training expenses.  He added some ranking points late in 2019 by claiming the gold medal with his stellar performance at the Zambia International.

During the Olympic qualifying process in 2019, Lam was competing in back-to-back tournaments, which left little time for rest and relaxation.  The amount of traveling and competing he did made it difficult to focus on his quality of training.  If he was eliminated early in a tournament, Lam says he would ask competitors from other countries to train with him in order to keep the feeling of play consistent.  This wasn’t the type of focused training he was accustomed to.

Many of the international tournaments he competed in were smaller in scale than the super series tournaments. These smaller competitions were less organized and required much more planning and coordination on the player’s part.  It’s a common misconception that his travels to foreign countries for competitions acted as a “vacation” of sorts, but he pointed out that any time outside of the tournament is spent in the hotel or the gym.  Being eliminated early from a tournament does not mean that sightseeing is on the horizon.  It just means he hits the ground running to plan and prepare for his next tournament.

Coronavirus has forced the cancellation of many tournaments that could’ve provided Lam with much-needed ranking points.  Though the pandemic is an unwelcome disruption to Olympic plans, it has afforded him a break from traveling and jet-lag.  It’s also allowed him to get plenty of rest and focus on the quality of his training.

In addition to keeping in top form, Timothy Lam has been coaching part-time at the California Badminton Academy, sharing his talents with younger athletes.  His future goals include retiring from professional badminton after the 2021 summer competitions and playing for fun in local tournaments. He hopes to help give back to the community, and pass his skills down to younger athletes through practice and sparring.

Timothy Lam is currently ranked #1 in the US for Men’s Singles.

Blast From the Past

Check out some of Lam’s junior highlights in this doubles competition from the 2013 USA Junior Nationals!

How to do a badminton serve – for all skill levels. 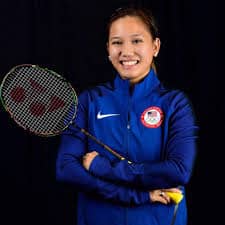 Howard Shu is a US Singles / Mixed Doubles player and former Olympian. Learn more about him here!